Disclaimer: I don't have access to the result sheet, so this isn't necessarily 100% accurate.

Today I entered a strongman competition, it had two divisions elite and intermediate, I entered the second. No weight classes. 17 competitors in my class, of which 4-5 guys was in their upper teens, maybe they should be deducted? ;) Mostly unfamiliar or new events to me.

Conans circle: I had promised myself to never ever again enter a contest with just this specific appartus used, I held that promise for three years. The problem is that it's adjustable in height within a range, but the height I need isn't there, so as soon as I become a little fatigued it gets stuck on the ground. I tried turning the handle around which punished me with a liftoff from more or less full squat. I walked slightly less than two laps, last time I walked past two. I think I came 11th or so. 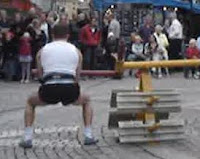 Power stairs: The first two weights went fast/ok, the third took ages (height issues). I finished 8th, the only ones I beat was the ones who couldn't finish.

Bonus - wrestling: The local wrestling team put up a mat where I had to challenge two other guys. The only thing this made for the competition was tiring me out ;)

Yoke Walk: This was the first event I saw the competitors, first I couldn't believe I got beaten by these guys. Then came a bunch of fast, but not insane times. I walked as fast as I could without risking to lose control. 220kg for 20m in 11-something seconds, good enough for a 5th place. I wish they would've used a heavier weight.

Deadlift hold: I held 2x100 kg just under 1:11, good enough for 2nd place. In this event the light weight was probably good for me, my grip is more enduring than strong.

Was in 5th place before last event, with a lot of guys right behind me, and #4 far ahead.

Carry+pull-medley: Really light weight made this a tempo event. I tripped on the rope (used to pull the sled) and fell, finished in 40 secs, a lot of guys between 35 and 40.

Total: 8th place. I was on the wrong side of all small margins (many times it's the other way around). I suppose this should be really disappointing, but I don't take this too seriously anymore, it's fun getting out.